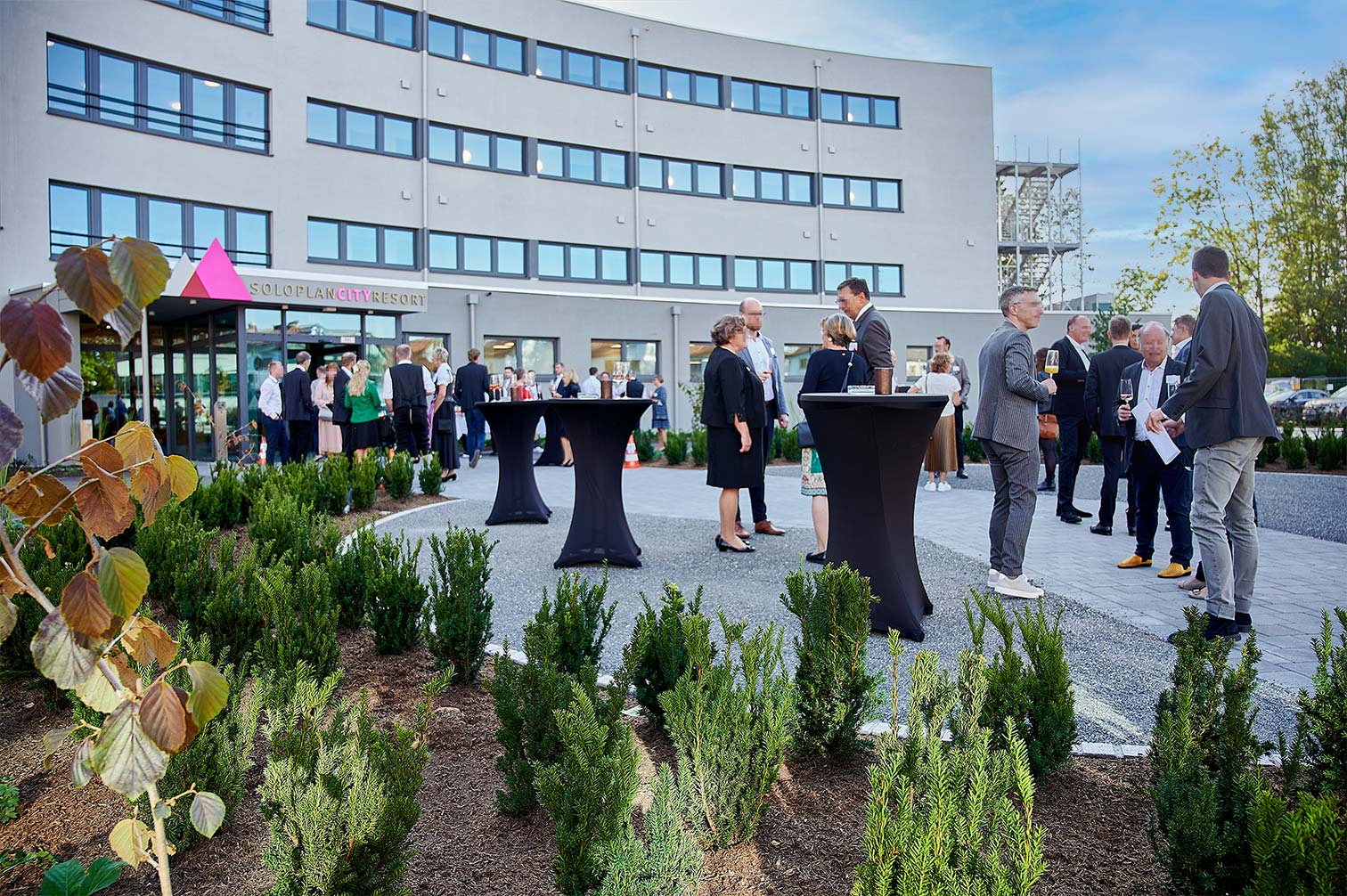 Soloplan celebrates the opening of the new Soloplan City Resort

After a year and a half of construction and the tireless efforts of numerous workers and associates, the time had finally come: On the first weekend in September, the grand opening of the 4-star business hotel Soloplan City Resort took place at the Berliner Platz in Kempten.
On the opening weekend, the Kempten-based software company Soloplan welcomed more than 500 interested guests, who were curious to see the now-completed site of Soloplan City at the Illerhöhe in Kempten. To celebrate the opening of the hotel, a diverse programme took place for the guests on Friday evening and Saturday. During regular guided hotel tours, the visitors were able to admire the bar, the reception, the restaurant and the different categories of rooms, as well as the suite, and take a look behind the scenes of the hotel. In order to prevent any risk to safety or health arising due to the current situation, the 3G rule and the usual Corona protection measures were applied at both events.

At the VIP gala evening on Friday, Soloplan CEO and building owner Wolfgang Heidl welcomed numerous guests from politics and the regional economy. In an interview round at the beginning of the evening, the guests learned interesting background information about the hotel project–from the conception and the construction to the completion of the hotel complex. Apart from the Heidl family and the hotel manager Michael Rießland, Dr Richard Schießl of the Kempten city administration, the contractor Gerhard Breher and the architect Leopold Mohr took part in the discussion round. Entertainer and TV food expert Sebastian Lege moderated the evening with humour and piqued the guests’ interest with intriguing culinary expertise. With delicacies disguised as fast food and countless anecdotes from his TV show “Die Tricks der Lebensmittelindustrie” (The Tricks of the Food Industry), the special guest from Düsseldorf, Germany, captivated the audience.

The fair in Soloplan City on Saturday was also a great success. Starting at 10:00, the band from Betzigau accompanied the fair day and opened the festivities with a hearty morning pint. All of the visitors had the opportunity to explore the new hotel and its rooms in regular guided tours. In the offices of the software company Soloplan, specialist lectures on exciting future topics and the career opportunities at Soloplan City took place. In the outdoor areas as well, there was plenty to see: At fair stands, visitors were able to talk to employees of both businesses and obtain information about the different job offers and apprenticeship opportunities both in the IT sector and the gastronomy sector. A variety of food trucks and stands, hosted by the hotel tenant Michael Rießland, catered for the culinary needs and ensured that all guest were satisfied.

On the Soloplan City site, the hotel, since its official opening in the beginning of September, offers 38 luxuriously furnished rooms as a retreat in an elegant ambience for business travellers and international business guests. Of course, the hotel will also be available for private travellers and tourists. As of now, the doors of the hotel restaurant are open for restaurant guests from near and far–and thus not only for hotel guests. The modernly designed restaurant with an Allgäu flair offers guests a lunch buffet during the week as well as national and international à la carte meals in the evening and on weekends. Find out everything about the hotel on the website of the Soloplan City Resort.