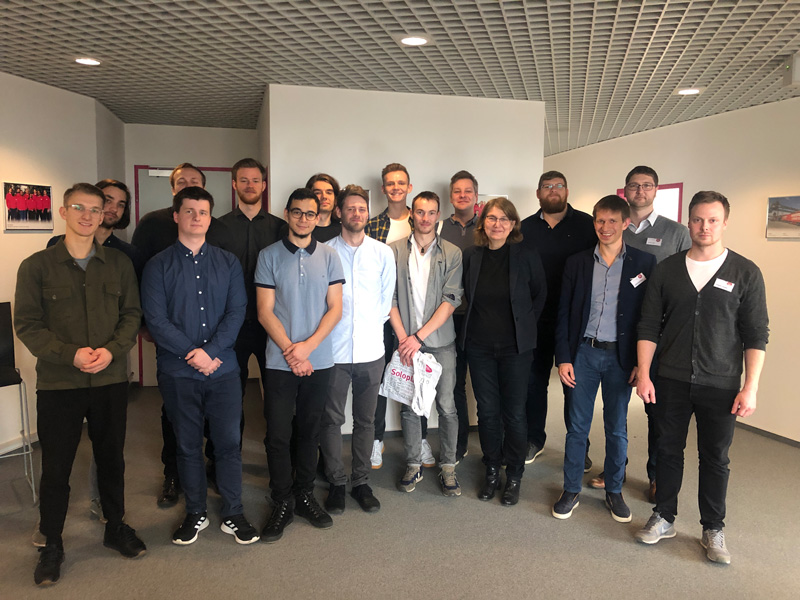 On Friday, 31 January 2020, some of our colleagues from Kempten and Dresden visited the Technical University in Dresden. In 2019, the students were given an assignment regarding the topic “Development of a concept for our warehouse management app inSCAN”. Twelve participants worked on the project in three groups of four: ”Pharmaceuticals”, “General cargo” and “Paper”.

Similar to the students at the University of Kempten, the challenge for the students in Dresden was to develop a finished concept for an app which is to optimise processes such as stock transfers, placements and removals in connection with inSCAN. An important part of the concept was to be a scan functionality which was to allow users to identify and scan necessary information, such as serial shipping container codes or the global returnable asset identifiers of the goods.
Additionally, an important criterion was that the warehouse management app was to allow users to make inventory, including the associated stock list. Process-supporting features such as voice control, vibration and a scan engine were also an advantage, as they correspond to our zeitgeist. At the end of the impressive presentations, the jury, consisting of three Soloplan GmbH employees and Prof. Strahringer, had the difficult task of selecting the winning team. Even though each presentation was entirely positive and the students of the TU Dresden impressed the jury with innovative ideas, the jury were eventually able to determine a victor: team “General cargo”.